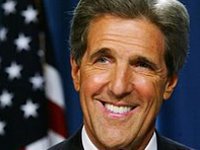 U.S. Secretary of State John Kerry accused Moscow of escalating the situation in Ukraine. Kerry blamed the Russian authorities for the organization of "a full-scale, externally planned military operations."

"For seven days, Russia has refused to take a single concrete step in the right direction. Not a single Russian official -- not one -- has publicly gone on television in Ukraine and called on the separatists to support the Geneva Agreement, to support the stand-down, to give up their weapons and get out of the Ukrainian buildings," he said.
It is only the Ukrainian side that sticks to the Geneva agreements, the head of the American diplomacy believes.

"If Russia continues in this direction, it will not just be a grave mistake, it will be an expensive mistake," he said.

Meanwhile, the Ukrainian armed forces, contrary to the Geneva agreements, continue their special operation in the south-east of Ukraine. On April 24th, the Ukrainian troops killed five local militiamen.

"After threatening to bring the troops directly to the Ukrainian border , I want to make clear : if Russia continues to act in the same direction, it will be just a deadly mistake , it will be an expensive mistake ," John Kerry said.