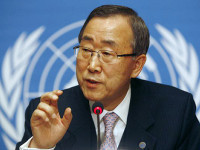 Acting president Alexander Turchynov, who was appointed by the Verkhovna Rada, said earlier in a telephone conversation with Ban Ki-moon that one should conduct  a joint operation in the east of the country together with UN peacekeepers.

As a result, Ban Ki-moon said that sending troops to Ukraine was impossible as it required a UN Security Council mandate.

"Without a clear mandate from the Security Council resolution and I can not take any action," said the Secretary General.