Iran outraged with USA's reaction to new official at UN

Tehran was outraged with the U.S. reaction about the appointment of the new Permanent Representative of Iran to the United Nations. This was stated by Foreign Ministry spokesman of the Islamic Republic Marzieh Afham. 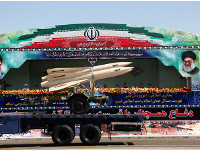 "The U.S. actions against the official, appointed by Tehran on the post of Permanent Representative of Iran to the UN, Hamid Abu Talebi, are unacceptable," said Afham.

The remarks from the Iranian diplomat came in response to the words from White House spokesman Jay Carney, who said that the U.S. did not consider it appropriate for Talebi to enter the territory of the United States. "We have informed the Iranian government that this choice is not appropriate," said Carney.

Iran consistently fulfills its part of the November agreement with the "group of six" of international mediators. There are no complaints to the Islamic Republic, the head of the IAEA, Yukiya Amano said.

"I can tell you that the requirements of the agreement are being met, as planned," said Amano.

The IAEA is responsible for monitoring he implementation of agreements by the Iranian side.

A third round of talks is currently being held in Vienna between Iran and the "group of six". The parties discuss a comprehensive agreement on the Iranian nuclear program.