Ukraine: It's a deal

Announced by President Yanukovich early this Friday in Kiev, confirmed by French Foreign Minister Laurent Fabius, there has been an agreement between the Ukrainian Government and the Opposition setting forth a gateway towards solving the current crisis. 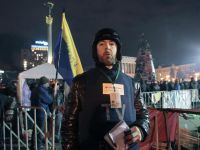 The deal is expected to include a national unity government and constitutional changes, possibly going back to the 2004 constitution in which Presidential powers were limited. It is believed the former will be formed by the beginning of March and the latter will take place by Monday. A constitutional reform process redrawing the lines of power between the President, the Government and the Parliament, will be performed over the Summer and will be completed by September. A Presidential election, which was to take place in 2015, is to be brought forward to the end of 2014.

The European Union has decided to impose sanctions on Ukrainian officials as a result
of the turmoil in the country's capital city, Kiev after around seventy-seven people (police officers and demonstrators/protesters) lost their lives in an escalation of violence. 577 were injured, according to Ukrainian Health Ministry statistics.

The sanctions include travel bans and a freeze of assets, imposed upon those Ukrainian officials deemed responsible for "human rights violations, violence and use of excessive force" according to Catherine Ashton, head of EU Foreign Affairs and Security Policy. Export licences were also suspended for products which could be used by the security forces in Ukraine to restore order.

The European Union sanctions follow targeted sanctions imposed by Washington against certain individuals in Ukraine. US Vice President Biden has informed Ukrainian President Viktor Yanukovich of the decision by the USA to impose sanctions.