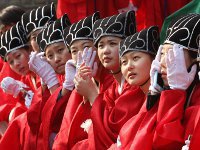 Russian President Vladimir Putin signed a decree on Russia's move to join the sanctions against North Korea. The sanctions were adopted by the UN Security Council in March of this year after North Korea conducted the country's third nuclear test on February 12.

Russia's reaction after the nuclear test explosion in DPRK was more restrained compared to the reaction from the world community. The head of the Russian Foreign Ministtry, Sergei Lavrov, complained that despite the neighborly relations with North Korea, Pyongyang did not listen to Russia's warnings not to conduct the nuclear test.