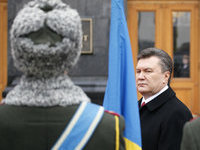 Ukrainian President Viktor Yanukovych named five conditions, under which the country would sign the association agreement with the EU.

Firstly, the EU should resolve contradictions in the economic and trade cooperation with Russia and other members of the Customs Union. Secondly, Ukraine's cooperation with the International Monetary Fund and the World Bank should be restored. Thirdly, trade restrictions on certain positions of Ukrainian exports, including those imposed in the 20th century, should be revised. The EU should also unlock the programs of budget and sectoral support and allocate resources of macro-financial assistance to the country.

Yanukovych said that Ukraine was hoping for active participation of the EU and international financial institutions in the modernization of the Ukrainian gas transport system as a key element of the energy network. To crown it all, the EU should use all adequate mechanisms to guarantee Ukraine's energy independence.