Yulia Tymoshenko says no to food and yes to European integration 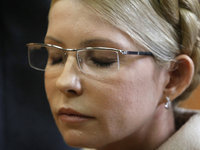 Ukrainian ex-prime minister Yulia Tymoshenko, who currently remains at a hospital in Kharkov, refuses to eat. Tymoshenko went on a hunger strike demanding the signing of the Association Agreement with the EU.

In addition, Tymoshenko insists Ukraine's President Viktor Yanukovych should step down. According to her lawyer, Tymoshenko has already addressed to Yanukovych with an open letter, in which she gave him some advice.

Mass protests have been held in Kiev for several days already. The Ukrainians protest against the government's move to refuse from preparing an agreement of association with the EU.

In addition, a draft resolution of no confidence to the Cabinet of Minister has been submitted to the Verkhovna Rada (the Parliament) of Ukraine.