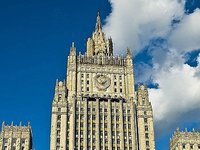 Deputies of the Labour Party and party Democrats 66 of the Dutch Parliament called to suspend activities related to the celebration of the 400th anniversary of the establishment of diplomatic relations with Russia in connection with the attack on Deputy Ambassador of the Netherlands, 60-year-old Onno Elderenbosch in Moscow.

A representative of the Labour Party called to cancel the activities until Russia was able to guarantee safety to Dutch diplomats on its territory. Previously, Foreign Minister of the Netherlands, Frans Timmermans, responded to the incident. He announced an intention to summon the Russian ambassador in The Hague for clarification.

The Investigative Committee of Russia has filed a criminal case against the attack on the Dutch diplomat.

An employee of the Dutch embassy was assaulted and beaten by unknown assailants on October 15 at night. The assailants entered his apartment having introduced themselves as electricians. In the beginning of October, an adviser to the Russian Ambassador to the Netherlands, Dmitry Borodin, was beaten in The Hague. The local police broke into the diplomat's apartment on the pretext of ill-treatment of children.