US war veterans want Obama out of White House 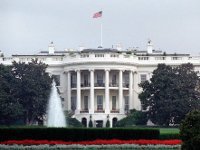 Veterans of U.S. armed forces and supporters of conservative movements came to the rally to the White House, demanding the resignation of President Barack Obama and members of the Congress.

Another protest action was held at the WWII Memorial, which was  previously closed due to the government crisis. Near the Congress, demonstrators demand senators should reach a compromise on the budget and the debt limit.

Meanwhile, national parks and museums that are still funded by the state governments and charitable organizations are now open after the break. There are only four days left before the possible U.S. default on debt obligations.