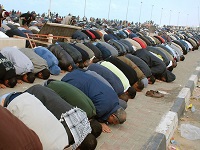 A court of Malaysia, in the wake of aggravated sectarian disputes, adopted a ruling, according to which the word "Allah" can only be pronounced by Muslims.

Thus, the court upheld the decision of the government. According to the judge, the word "Allah" is not an integral part of the Christian religion. If the word is used by non-Muslims, then it may give rise to conflicts in the society.

Meanwhile, representatives of Christian denominations of Malaysia say they have used the Arabic word for centuries, and will appeal the court ruling.

Christianity is the third religion in Malaysia on the number of followers, accounting for about nine percent of citizens. The first place is Islam (61 percent of the population), the second is Buddhism (about 20 percent).