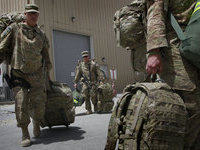 The temporary closure of the U.S. government and other state institutions will hit the families of American soldiers, who were killed in the war. The Pentagon will temporarily stop paying benefits to them, Breitbart said.

Taking into consideration the fact that President Obama in one of his recent speeches said that it was only political reasons that could not allow partial resumption of government payments, it is only Obama to blame for such a turn of events.

Unfortunately, as a result of the shutdown, we do not have the legal authority to make death gratuity payments at this time. However, we are keeping a close eye on those survivors who have lost loved ones serving in the Department of Defense," said Lt. Commander Nate Christensen, a spokesman for the Department.

Speaker of the House of Representatives, Republican John Boehner, accused the Obama administration of "needlessly withholding the money."

Over the weekend, four U.S. soldiers were killed in Afghanistan as a result of military actions. Their families will not receive the benefit of 100,000 dollars, which they would have received, if the tragedy had occurred a few days earlier, before the government and a number of government agencies stopped working on October 1st.