Over 2 million flee Syria carrying nothing but clothes they wear 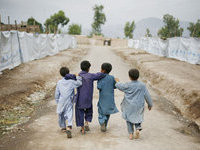 The number of refugees, who were forced to leave Syria since the beginning of the internal armed conflict, has exceeded two million, the United Nations High Commissioner for Refugees said.

More than 700,000 of them remain in Lebanon; the number of refugees in other countries that border on Syria has been growing as well.

In the report from the UN department for refugees says that women, children and men continue to leave the war-torn country, carrying only the things that they can wear.

According to various reports, about a half of refugees are children; three quarters of them are under eleven years of age. The current refugee crisis is the largest one during the recent 20 years after the genocide in Rwanda in 1994.