Nicaraguan President Daniel Ortega announced his intention to appeal to the UN International Court of Justice to return the province of Guanacaste of Costa Rica back to Nicaragua, Agence France -Presse reports. 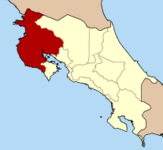 Ortega originally wanted to discuss the return of the "occupied" province with President of Costa Rica, Laura Chinchilla, but the latter flatly declined any negotiations on this issue.

Guanacaste that was separated from Nicaragua in 1814 is a popular tourist destination in Central America.