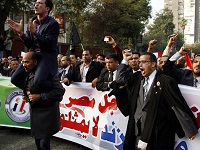 Following the removal from power by the military, which took place on July 3, Islamist President Mohammed Morsi has been staying under house arrest. The former head of state is under investigation on several counts, including, escape from prison, state treason and economic crimes.

Earlier, the former president and other senior officials were banned from traveling abroad, and their accounts in national and foreign banks were frozen. After the coup, the chairman of the Constitutional Court of the country Adly Mansour took on the duties of the president for the transitional period.