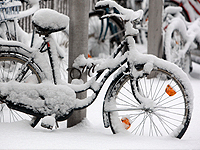 In the midst of July, Brazil gets snow and temperatures below zero Centigrade. The unusual cold has already killed three people. A cold front from Antarctica also affected Uruguay, Chile, Argentina and Paraguay.

In some parts of Brazil, temperatures fell to - 7.4 degrees below zero Centigrade. In Sao Paulo, a new temperature record has been recorded since 2000  - only +5.2 degrees. The cold threatens thousands of homeless people. Many of them were hastily given shelter.

In Brazil, three people have died from cold, three more died in Paraguay and Uruguay. The death toll could rise.

Many Brazilians take photos of children making snowmen in the streets and post the pictures on the Internet. Some regions of Brazil have not seen snow for many years.