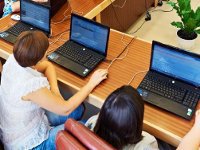 The number of Internet users in China has grown to 591 million people. Over the past few years, the number of Chinese people, who use their mobile gadgets to surf the web, has increased by 20 percent, according to Time.

The report about the development of the Internet in China was published on Wednesday. According to the China Network Information Center, at the end of June, the number of Internet users in China increased by 10 percent compared to last year. The total number of users of wireless Internet in China has reached 454 million people.

Last year, the Chinese government decided to significantly tighten censorship on the Internet after the government of Egypt and Tunisia were toppled largely because of social networks.