South African President Jacob Zuma said that he visited the country's former leader Nelson Mandela at hospital and found out that his condition had worsened. 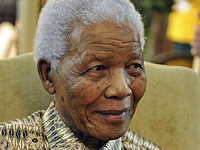 Mandela, who became the first black president of the country after he had spent decades in prison and fought against apartheid, has been hospitalized with a lung infection repeatedly since the beginning of the year.

A few days ago, doctors estimated his condition as stable. However, according to Zuma, his condition worsened over the weekend. Doctors are doing everything possible to save the 94-year-old South African.

Controversial for much of his life, right-wing critics denounced Mandela as a terrorist and communist sympathiser. He has nevertheless received international acclaim for his anti-colonial and anti-apartheid stance, having received over 250 awards, including the 1993 Nobel Peace Prize, the US Presidential Medal of Freedom and the Soviet Order of Lenin. He is held in deep respect within South Africa, and has been described as "the father of the nation". He is often referred to by his Xhosa clan name of Madiba.