Germany does not want to see Turkey as EU member?

Germany has temporarily closed the doors to the European Union for Turkey due to anti-government demonstrations that have been shaking the country recently. The director of the Center for German Studies of the Institute of Europe, Vladislav Belov, shared his opinion on the subject with Pravda.Ru. 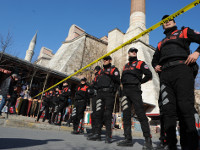 "Today, Turkey's accession to the EU is out of the question. Turkey is a partner of the EU, its population reaches 79 million people, which is almost the same as in Germany. Turkey lies on the border of Europe and Asia and acts as a significant player on the Eurasian continent. But for a number of reasons, including the nature of the country and the people living in it, the nature of power and the regime that it has, it seems, Turkey does not meet most requirements of the European Union. One can speak about models of cooperation rather than membership.

"Germany is the main country that determines the nature of negotiations with Turkey, and there is no consensus on this issue. Germany currently goes through the period of pre-election struggle. Elections to the Bundestag will take place on September 22. Turkey becomes a certain element of that struggle. The decision to suspend the relevant talks, in my opinion, is a part of this struggle. The ruling party of Germany shows its concerns about the events that happen in Turkey.

In any case, Germany will stick to its current position in relation to Turkey, and I think that's correct. Turkey is a complicated and big country. Further negotiations will be held in the context of models of cooperation with this country."

The talks on Turkey's accession to the EU began in 2005.