USA unveils list of most dangerous inmates of Guantanamo prison

The list of most dangerous inmates at Guantanamo Bay prison has been unveiled. The administration of U.S. President Barack Obama has published the list of 46 names, mainly citizens of Yemen and Afghanistan. A Russian national, Ravil Mingazov, is also listed among the most dangerous prisoners. 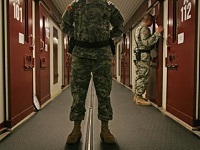 Guantanamo prison was supposed to be closed in accordance with the decree signed by Barack Obama in 2009, but he was never able to overcome the resistance of his Republican opponents. While politicians argue, one of the most notorious prisons in the world continues to operate, despite numerous protests on the part of human rights organizations. To date, the Guantanamo prison contains as many as 166 prisoners.

As it turned out, the information that was provided by subordinates of Barack Obama was not quite accurate. The list includes the prisoners, who can not be prosecuted due to insufficient evidence. They can not be released for certain reasons either as U.S. authorities consider them too dangerous.