Israel says no to Russian peacekeepers 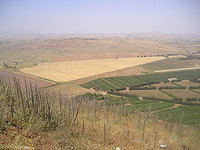 The Israeli government has not supported a Russian proposal to send Russian peacekeepers to the ceasefire line between Israel and Syria on the Golan Heights.

This question was discussed on the phone between Israeli Prime Minister Benjamin Netanyahu and President Vladimir Putin. Previously, Martin Nesirky said that the agreement on disengagement and the protocol between Syria and Israel did not allow the participation of UN Security Council member-countries in this mission. Sending Russian troops to the Golan Heights would be a violation of the mandate of peacekeepers.