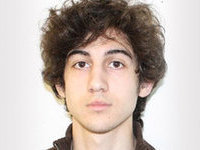 Dzhokhar Tsarnaev, a suspect of Boston marathon bombings, started speaking for the first time since his injury on April 19. On Wednesday, he was able to call his mother, describing his condition to her. As told by Zubeydat Tsarnaeva, the man's mother, he said the following: "I'm fine, my wounds are healing. Everything is in God's hands. Calm down. It'll be all right."

The man was wounded in a shootout with police. The attack on April 15th in Boston, which occurred during the international marathon, killed three people and injured more than 250.