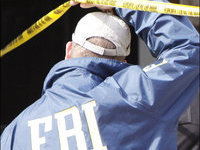 The FBI agents, who eliminated Boston terrorist Tamerlan Tsarnaev, died as they fell out of a helicopter, the press service of the FBI said.

Two officers of the counter-terrorism department of the Federal Bureau of Investigation died on Friday, May 17. The incident occurred during training exercises conducted by the FBI at a distance of 12 nautical miles from the coast of the U.S. state of Virginia.

An official statement from the FBI says that special agents Christopher Lorek and Stephen Shaw fell out of a helicopter while training a complex exercise. The agents were supposed to be lowered on a rope on a ship from a helicopter. For yet unknown reasons, the two agents fell out of the helicopter and were killed in the fall.

"Like all who serve on the Hostage Rescue Team, they accept the highest risk each and every day, when training and on operational missions, to keep our nation safe. Our hearts are with their wives, children, and other loved ones who feel their loss most deeply. And they will always be part of the FBI Family," FBI Director Robert S. Mueller said in a statement, according to CNN.