The U.S. suspects Russia of delivering missiles to the Syrian government. According to U.S. intelligence, Moscow intends to supply Damascus with advanced anti-ship missiles called Yakhont. Such a move, experts say, would help President Bashar al-Assad to effectively struggle with any attempts to intervene, prevent arms supplies to rebels and avoid the naval blockade of the country. 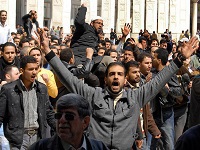 Washington believes that it could undermine the process of peaceful settlement of the conflict and encourage Bashar al-Assad in his ability to hold power in the country.

However, the information appeared a couple of weeks before a peace conference when representatives of official Syrian authorities and opposition leaders are expected to sit down to discuss the problems of the conflict.

During the recent visit of U.S. Secretary of State John Kerry to Moscow, the parties discussed the issue of non-supply of arms to the regime of Bashar al-Assad, rather than the peace settlement of the conflict. One may wonder what kind of reaction Washington would show if Russian missiles appeared in Syria for rebels rather than for the government?