Delegations from 15 countries to assist Maduro's inauguration in Venezuela

Venezuela's Minister of Communication and Information, Ernesto Villegas, informed that delegations from 15 countries will travel to Venezuela to take part in the inauguration ceremony for Venezuela's newly elected President, Nicolás Maduro. 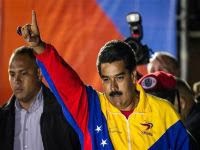 Cristina Fernández de Kirchner, Argentina's President, confirmed that she will personally come to Caracas for the ceremony with ministers and diplomats of her country.

"Together with my colleagues from other South American states, we will accompany Nicolás Maduro on his special day," Cristina Fernández de Kirchner wrote via her official twitter account @CFKArgentina, adding that "we will be in Venezuela this coming Friday to give our message of peace, concord, unity and respect for democracy, which should reign in the Latin American region."