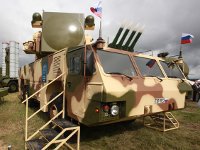 To provide security at the World Cup 2014 and the 2016 Olympics, Brazil will buy Russian anti-aircraft missile and gun systems Panzer-S1, officials said.

Another goal of the Brazilian order is to transfer Russian technologies and get Brazilian companies involved in the production of Panzer-S1 systems.

Panzer-S1 was developed in Tula. The system is able to strike targets in the radius from 200 meters to 20 kilometers at the height of from 5 meters to 15 kilometers. The system can simultaneously destroy 24 targets, such as missiles, aircraft, helicopters, armored vehicles and boats.

On February 20-21, 2013, Russia and Brazil signed a declaration of intent on cooperation in the field of air defense.