New Pontiff to be the last, Irish prophet says 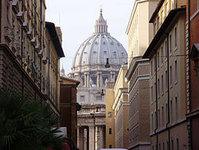 Meanwhile, it has been reported that the new Pope will be elected by Easter, which this year will take place on March 31. According to the prophecy of St. Malachy, the new Pontiff will be the last.

Pope's brother Georg Ratzinger said that the decision of Benedict XVI (Joseph Ratzinger) was "natural" as it was getting increasingly difficult for him to walk. "Age crushes on him. My brother wants to rest," - said Georg, who is 4 years older than his brother.

A number of leading political figures, including Italian Prime Minister Mario Monti and German Chancellor Angela Merkel, expressed sympathy for the resignation of the Pontiff.

Saint Malachy was an Irish saint and Archbishop of Armagh, to whom were attributed several miracles and a vision of the identity of the last 112 Popes. He was the first Irish saint to be canonised by a pope.

The Prophecy of the Popes, attributed to Saint Malachy, is a list of 112 short phrases in Latin. They purport to describe each of the Roman Catholic popes (along with a few anti-popes), beginning with Pope Celestine II (elected in 1143) and concluding with current pope Benedict XVI's successor, a pope described in the prophecy as "Peter the Roman", whose pontificate will end in the destruction of the city of Rome.