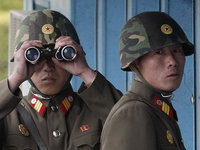 The head of the South Korean Joint Chiefs of Staff said that the country was ready to launch a preemptive strike on North Korea if the latter tries to use nuclear weapons in the future.

"If North Korea demonstrates a clear intention to use nuclear weapons, we will strike first, even if there is a threat of war," General Chung Syn Cho said during a session of the National Assembly on Defence. "A preemptive strike does not require consultations with the United States, it is a right for self-defense."

Experts, however, believe that the probability of a pre-emptive strike on the part of South Korea is quite small, says GlobalPost. The Korean War ended in 1953, and since then, Washington has been holding Seoul from taking any military provocations, fearing destructive consequences. South Korean General Cho also said that South Korea would have a reserved approach, trying to prevent an escalation of the conflict.

Professor at the Seoul National University Chung Ying Yong, in turn, said: "The fact that the North gets ready to continue nuclear tests proves that it does not intend to abandon its nuclear program. Whether we recognize its status of a nuclear power or not, regardless the rhetoric of Seoul and Washington on nuclear programs, Pyongyang will proceed to its next test. In this case, Seoul will need to develop a new deterrence strategy."