The export value of dead fish found in the waters near Iceland is estimated at about 20 million pounds. The cause of the phenomenon is shrouded in mystery. Moreover, it is the second incident in the regionsince December 2012, The Daily Mail wrote. 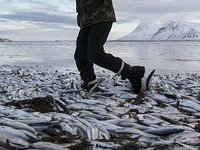 The dead herring, being one of the main exports of Iceland, covered the entire water surface of one of the fjords of the Snayfedlsnes Peninsula.

The total weight of the dead fish makes up 25-30 tons; its cost already exceeds 18.9 million pounds, the Morgunbladid newspaper wrote.

According to biologist Robert Stefansson, about seven tons of dead herring has been deposited on the beach, whereas the amount of dead fish on the sea floor is much larger. The situation in December was the same: about the same amount of fish mysteriously died.

The most likely causes, according to researchers, could be the presence of landfills near the fjord and the works on the construction of the bridge. The fish could be deprived of oxygen under such circumstances.

Not to lose even more money, the Institute for Marine Research decided to investigate the phenomenon.