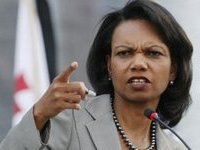 Condoleezza Rice, a former U.S. secretary of state, will work on American television channel CBS as an expert.

The experience of 58-year-old Rice, according to CBS President David Rhodes, will be used in TV programs, "during the investigation of the issues that America faces both abroad and inside the country."

Condoleezza Rice served as Secretary of State from 2005 to 2009. She became the second woman after Madeleine Albright, who worked on such a high position in the U.S. administration.

Since 2009, she has been teaching political science at Stanford University. Also , the former U.S. Secretary of State appeared in TV series "30 Rock" as a politician.