The Iranian authorities have supported the plan of the Syrian President Bashar al-Assad on the peaceful settlement of the conflict in the republic and call for its implementation. 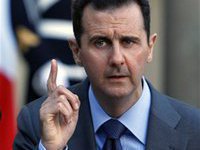 "This plan rejects violence and terrorism, as well as any foreign intervention. Addition, it determines the future of the country through an inclusive political process," Iranian Foreign Minister Ali Akbar Salehi said on Monday.

"In connection with its stance to solve the Syrian crisis politically, Iran supports the initiative of the President of Syria Bashar al-Assad to end the conflict in the country," the minister added.

He also called upon global and regional powers to support the extrication from the crisis through the "Syrian solution."

Assad has recently presented his own vision of the state of affairs in the country in a televised address to the Syrian people. He rejected violence and proposed a comprehensive plan to gradually extricate from the crisis. The plan for a peaceful settlement of the conflict consists of six stages, and includes, in particular, the obligation of foreign countries to stop the financial support to terrorists, convene the governmental conference on the national dialogue, set up a new government, elaborate a new constitution and declare general amnesty.

Assad refused to either make any concessions or conduct negotiations with armed opposition groups. He did not say a word about his possible resignation either. The United States has already called the plan the Syrian president as a plan "divorced from reality." Western countries and the Syrian opposition have once again demanded the Syrian leader should leave and accused Iran of supporting the official Syrian government.