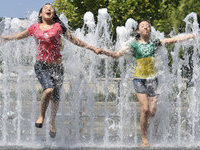 Jens Vinninghof, a meteorologist, claims that this is the warmest Christmas in Germany. According to him, Germany has never seen higher temperatures on Christmas day in history. German weather services have been monitoring temperature records in the country for more than a hundred years.

One of the recent temperature records, recorded in Germany, was a temperature of 2.3 degrees above zero Celsius on the top of the Zugspitze - the highest point of the country, located near the border with Austria.

In the afternoon of December 24th, the temperature in Munich climbed to 20.7 degrees Celsius.  Jens Vinninghof noted that the official record, registered by meteorological service in the Olympic Park in Munich, was only 16.2 degrees. The temperature of 20.7 degrees above zero at 1:00 p.m. was really impressive.

Tens of thousands of people took the opportunity and prefer to spend as much time as possible outdoors. Dozens of people put up chairs in the English garden to enjoy beer and the warm sunlight.

Meanwhile, last night in Moscow was the coldest in 2012. Night temperatures fell below the mark - 30 degrees in some areas. Many parents did not let their children go to school because of the cold.