The petition on arms control, addressed to Barack Obama and posted on the White House web site, has collected a record number of signatures - more than 160,000 in just three days. 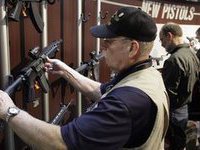 Never before have public initiatives been able to win massive support in the U.S. in such a short period of time. The Americans demand parliamentary hearings be held as soon as possible to adopt the laws that would restrict people's access to firearms.

The public awareness was attracted to this topic a few days ago, after 20-year-old Adam Lanza killed 26 people in an elementary school in Connecticut. The young man with obvious mental problems took the pistols, which he could find in this mother's house and went on a shooting spree in a local school. He killed his own mother and 20 children.

Obama has recently announced his intention to consult legislators and mental health professionals about adequate measures to prevent such stories in the future.

Meanwhile, U.S. top officials avoid any statements about the amendments to the law on the possession of weapons.