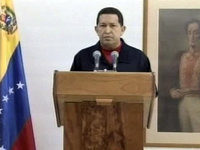 "The president has two or three months left. Unfortunately, the fatal denouement will take place in April," said Marquina.

This doctor is known for his predictions about the health of Hugo Chavez. He is close to the sources from Chavez's medical team in Havana and Caracas, the Russian News Service reports.

Marquina also explained the urgent departure of the president to Havana with the upcoming surgery that he is supposed to receive due to complications. He noted that during surgery Chávez is not likely to face any danger, but in the next 72 hours serious complications may occur, he said.

According to Marquina, the aggressively developing cancer threatens Venezuelan President with imminent paralysis.

"The disease has taken an aggressive form again, he has metastasized in the lumbar region. There is a compression of a nerve in the lumbar part of the spine, which can lead to paralysis", the doctor said.

On December 9, the Venezuelan leader announced that doctors had found another malignant tumor in his body. Chavez said that if anything happened to him, the vice president and the country's foreign minister Nicolas Maduro would become his successor.