Ukrainian PM and his government sacked

Ukrainian President Viktor Yanukovych has signed a decree on the resignation of Prime Minister Mykola Azarov and the government. The Cabinet will be fulfilling its duties until the new government is formed, the press service of the Ukrainian president said. 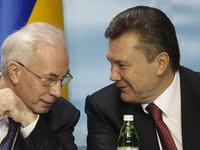 On December 3rd, Ukrainian PM Azarov appealed to the President with a statement for resignation since Azarov was elected a deputy of the Parliament of Ukraine at the parliamentary elections on October 28th. Yanukovych accepted the resignation, which automatically triggers the resignation of the government under the current law.

All active members of the government will continue to work in office and perform their powers until the new cabinet of ministers is formed. The decree comes into force from the date of its publication, UNIAN reports.

The resignation of the Cabinet was expected. Under the law, an MP should not take any position other than the position of a deputy.

According to some experts, the head of the National Bank of Ukraine Sergey Arbuzov is among the likely candidates for prime minister.