19:16
Putin grants Russian citizenship to Edward Snowden
19:00
Consul of Japan caught red-handed for espionage in Russia
18:48
The status of the special operation in Ukraine likely to be changed after referenda
13:57
Thirteen killed in mass school shooting in Izhevsk, Russia
19:06
Kremlin responds to rumours to call-up 1.2 million people
15:18
Kremlin explains status of Ukraine's attacks on Donbas after referenda
14:47
Erdogan: Ukrainian politician Viktor Medvedchuk left for Russia from Turkey
14:27
Russian Defense Ministry clarifies professions exempt from partial call-up
21:31
Lavrov at UN Security Council: It is you who turn a blind eye on Kyiv's war crimes

World gets ready for doomsday 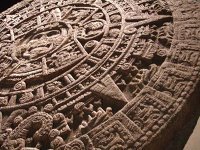 Meanwhile, more than two hundred Russians decided to get married on the day when the world should end. In Krasnoyarsk for example, 112 couples set the wedding ceremony on 21/12/12. A boom of weddings is expected on this day, taking into account the symbolism of the moment.

"End of the World" is one of the most popular searches on the Internet, and enterprising people do business on attractive fears. Trips to Mexico - in the heart of apocalypse - are especially popular these days. In 2012, Mexico will receive 52 million tourists, which will mark an increase of 12 million than last year.

In Transcarpathia, people try to survive the "doomsday" in a VIP-bunker, the only military-style hotel in Ukraine and the CIS, built on the foundation of the WWII bunker, the Komsomolskaya Pravda newspaper reports. However, the VIP bunker accepts orders for New Year celebrations - the first one will take place on December 22.

On the Internet, one can buy T-shirts and watches with doomsday symbols and Mayan pictograms. A Russian coupon website offers to purchase an indulgence before the apocalypse for $16. Thus, people can get a "ticket to Paradise."

In Simferopol, one can attend free courses to get ready for the end of the world. Leaflets with the invitation to the lectures are distributed in the city center. The organizer of the courses says that he has up to 15 people attending. "I want to explain to people that they have to take it easy and that they shouldn't panic," the man said. In his view, before December 21 people should stock up with water, candles and matches, because "there will be no electricity."

At the same time, the finding of archaeologists from the Boston University leaves no stone unturned in the apocalyptic versions. In the jungles of Guatemala, researchers found a more ancient Mayan calendar for 7,000 years ahead, which contained no mention of the 2012 doomsday.