North Korea has removed the portraits of Karl Marx and Vladimir Lenin from the main square of Pyongyang. The portraits of the communist leaders along with the image of the leader of the North Korean revolution Kim Il Sung had been decorating the building of North Korea's Ministry for Foreign Trade for decades. The faces were hanging there even after the Korean Workers' Party replaced references to Marxism-Leninism with the idea of ​​Juche during the 1980s, said Kommersant-online. 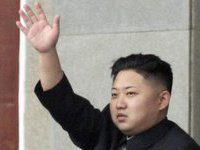 South Korean agency Yonhap was the first to have reported the disappearance of the portraits. The agency referred to fresh photos of the Kim Il Sung Square. According to experts, the disappearance of the portraits of Marx and Lenin may be another indirect sign of the changes, which 29-year-old Kim Jong Un started in the country after the death of his father, Kim Jong Il.

Experts say the young Kim often appears in public in a relatively informal atmosphere, such as visiting a local theme park. He became the first North Korean leader, who raised the curtain above his personal life, announced his marriage and started to appear in public with his wife.

Kim Jong Un even replaced the portrait of the founder of North Korea, Kim Il Sung with another one, where the leader is seen smiling. According to political analysts, these steps could indicate an attempt to reduce the isolation of the country and weaken the influence of the military. However, not that long ago, the North Korean authorities declared the readiness to launch intercontinental ballistic missiles at the United States.

In the meantime, another monument to Lenin was demolished in the center of Ulan Bator, the capital of Mongolia. The authorities have approached the question creatively. They put the dismantled monument up for auction, offering anyone to buy it for just $290. Instead of the Lenin monument, there will be a monument to the victims of 2008, when several people were killed in a mass protest action on the square of Ulan Bator.