Former Secretary of State Condoleezza Rice wrote a letter to former Prime Minister of Ukraine Yulia Tymoshenko. The text of the letter appeared on the net. Ms. Rice wrote that she was looking forward to meeting Tymoshenko. For the time being, though, Tymoshenko remains in Ms Rice's thoughts and prayers. 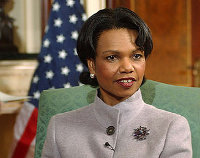 "Dear Yulia, I want you to know that you are in my thoughts and prayers. The world is watching the events concerning your imprisonment, and many are advocating on your behalf," the letter said.

In her letter, Rice reminded Tymoshenko of their previous meetings.

"I remember well the many times that we met, and I look forwards to the day when we can meet again. Please know that until then, I will think of you and pray for your health and release," reads the letter.

While the former U.S. Secretary prays for Tymoshenko's health, German doctors get ready to pay another visit to the patient. According to the lawyer of the Ukrainian politician, Sergei Vlasenko, the visit of German doctors "is expected to take place in the next few days."

Former U.S. Secretary of State handed over her letter to Tymoshenko in September, when she came to Ukraine to take part in "Yalta European Strategy" meeting. Rice gave the letter to deputy chairman of Fatherland party, Grigory Nemyr.

Yulia Tymoshenko has been serving her seven-year sentence since October 2011 for power abuse committed during negotiations about gas contracts with Russia. As Pravda.Ru wrote before, on May 9th, Tymoshenko was transferred from Kachanovsky colony in the Kharkiv region to Central Clinical Hospital No. 5, where she currently stays under the supervision of German doctors.

There were also other charges brought against the former prime minister of Ukraine. The charges were about the activities of corporation United Energy Systems of Ukraine, which Tymoshenko was in charge of during the 1990s. This case is pending at court. In addition, the Prosecutor General Office suspects Yulia Tymoshenko of her implication in the murder of deputy Evgeny Shcherban in 1996. The ex-prime minister denies all the charges.

Condoleezza Rice also wrote that America and Europe keep an eye on the development of Tymoshenko's case, since it carries great image and reputation risks for Ukraine.