US presidential hopeful Mitt Romney made another attack on Barack Obama, having called his electors the "victims entitled to extensive government support." Romney also stated that his "job is not to worry about those people." The video of Romney's surprise speech appeared on the Internet and became a hit immediately. 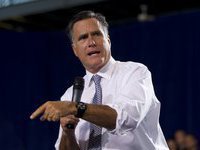 Romney's speech was filmed on candid camera at the time when the Republican candidate was having dinner with his private sponsors. Mr. Romney said that 47 percent of American voters supporting the incumbent president do not pay taxes and never vote for a Republican.

Romney also spoke of Hispanic and African American citizens, who support Barack Obama. In his view, if Hispanic citizens support the current American president, it would be time to say that the Republican Party and the whole nation has problems, MR7.ru reports.. Romney reminded that African Americans supported Obama in the past.

As noted by NTV, the video appeared on the web in a difficult time for Romney. The politician is a few percent behind Obama in the race. The Democrats have already commented the video.

"It's hard to serve as president for all Americans when you've disdainfully written off half the nation," Obama campaign manager Jim Messina said in a statement.

The presidential election will be held in the United States on November 6. According to a survey conducted on 2 September by Reuters / Ipsos, in which 1,400 Americans participated, 45 percent of voters are ready to vote for both presidential candidates.