Kim Jong-il to be embalmed by Russian specialists 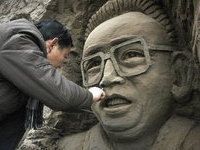 On Wednesday, December 28, North Korea holds the funeral service for its leader Kim Jong-il, who died on December 17. The first stage of the funeral will be held in Kymsusan memorial complex in Pyongyang - the official residence of Kim Jong-Il's father, Kim Il Sung.

According to North Korean media, Kim Jong-Il died from a heart attack as he was traveling by train across the country. His younger son, Kim Jong Un, has been named the successor.

According to RIA Novosti, the sarcophagus will be carried along the streets of Pyongyang prior to the ceremony. The people of North Korea will thus be able to bid farewell to the leader, who ruled the 24-million-strong country for over 17 years. According to South Korean media, Kim Jong-Il's body will rest in a glass coffin with the body of his father at Kymsusan palace.

Russian experts were invited to Pyongyang to embalm Kim Jong-Il, Yonhap agency said. The experts with Vladislav Kozeltsev at the head arrived from the Moscow Center for Biomedical Technologies. The specialists of the center preserve the body of Vladimir Lenin in the Mausoleum.  Kim Jong-Il's car, a carriage of his legendary armored train, his clothes and his desk will be on display in the tomb of the "dear leader."

A mass meeting of mourning is to take place at the central square in Pyongyang on Thursday morning. Up to 100,000 people are expected to take part in the meeting. They will swear an oath to Kim Jong Un, who still formally serves as Deputy State Defense Committee of the DPRK. Kim Jong Un has already been named the leader of the state, party and armed forces. The information about it has been published in the official publications of the country.

The funeral committee said that the ceremony would be marked with cannon volleys in memory of the deceased leader in Pyongyang and other cities. All locomotives and vessels will sound their sirens, whereas the citizens of North Korea will bow our heads during a three-minute moment of silence.

The DPRK authorities have decided not to welcome foreign delegations for the ceremony. However, a private delegation from South Korea arrived in Pyongyang to bid farewell the North Korean leader. The delegation is headed by the widow of former South Korean President Kim Dae-jung, who conducted the policy of "sunshine" towards the DPRK and visited Pyongyang, RIA Novosti said.

North Korea's main party newspaper Rodong Sinmun published a special article on the front page about the visit of the South Korean delegation. During the visit, Kim Jong Un thanked the guests for condolences, but there was no special meeting with him.