12:29
Henry Kissinger: There are three possible outcomes of the Ukraine crisis
11:53
Putin's decree causes securities of Japanese companies to fall
11:28
Russia lifts all coronavirus restrictions as COVID-19 incidence falls 64 times
19:10
Ukrainian MP says the capture of Russian regions was discussed at the NATO summit
18:26
Scholz names the conditions for lifting anti-Russian sanctions
17:40
Russian intelligence: Poland's working on scenarios for the dismemberment of Ukraine
17:01
Putin answers to Ukrainian's HIMARS with Sarmat and S-500
16:30
Emmanuel Macron ready for dialogue with Putin when necessary
15:51
Frozen Russian assets: The greatest theft in history 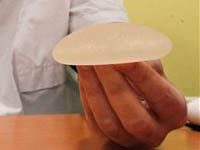 The French government recommended on Friday that tens of thousands of women in France seek removal of breast implants made of a suspect silicone gel by a firm that exported worldwide. It said the removals would be paid for out of public health insurance funds.

An estimated 30,000 women in France have had breast implants made by the now-defunct company Poly Implant Prothese SA (PIP), which produced about 100,000 implants a year before its product was ordered off the market in early 2010, says Reuters.

In a statement Friday, Xavier Bertrand recommended the removal of all PIP implants - not just ones showing signs of deterioration. The French state says it will foot the bill for the removals.

The statement said that while PIP implants have not been linked to an increased incidence of cancer, the risk that they could rupture and leak a questionable type of silicone gel has been shown. Tens of thousands of women in France, Britain, Italy, Spain, Portugal and other countries in Europe and South America have had implants made by PIP, reports Washington Post.

The French government is expected to hold a news conference later to announce whether it will pay for the removal. The authorities are likely to say they will cover the costs, says the BBC's Christian Fraser in Paris, but will only pay for a new implant if the treatment was done as part of reconstructive surgery following breast cancer.

Campaign groups in France say at least eight cancer cases, including one death, could be linked to these gels, according to BBC News.

At least 250 women with breast implants made by the French company at the centre of a scandal over faulty implants containing industrial silicone intend to sue at least six clinics in the UK, it has emerged. About 40,000 women in Britain have had silicone breast implants made by Poly Implant Prothèse (PIP), possibly including hundreds who have had reconstructive breast surgery on the NHS.

Details of the legal action emerged amid reports in France that up to 30,000 women may be told to have defective implants removed. French authorities shut down the manufacturers last year and supplies were stopped in this country after the company was found to be cutting corners and making breast prosthetics from cheaper industrial silicone normally used in electronics. The implants were also found to have a higher chance of bursting, informs The Guardian.