Teenager sentenced to 21 years for shooting gay student during class

The father of a gay Oxnard junior high school student spilled his rage in a Ventura courtroom Monday, telling the convicted killer that he could not forgive him for shooting his son "with the precision of a cold-blooded assassin." 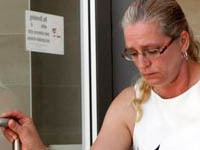 Greg King, reading a biting four-page statement to the court before Brandon McInerney was sentenced to 21 years in state prison, called jurors "incompetent" for failing to reach a verdict in the September murder trial, criticized the media for its coverage of the high-profile case and heaped blame on school officials for failing to watch over his son's well-being, informs Los Angeles Times.

A teenager was sentenced Monday to 21 years in state prison for fatally shooting a gay student during class, capping a case that raised questions about how schools should deal with sexual identity issues.

Brandon McInerney was sentenced under terms of a plea agreement calling for him to report to prison next month, after he turns 18. McInerney didn't speak at the hearing. His lawyer, Scott Wippert, said his client was sorry for killing 15-year-old Larry King, reports San Francisco Chronicle.

Brandon McInerney, 17, didn't speak at the hearing but his lawyer Scott Wippert said his client was sorry for killing 15-year-old Larry King. "He feels deeply remorseful and stated repeatedly if he could go back and take back what he did he would do it in a heartbeat, Wippert said. King's family said they couldn't forgive their son's killer.

"You took upon yourself to be a bully and to hate a smaller kid, wanting to be the big man on campus,"' King's father, Greg King, said on behalf of his wife. "'You have left a big hole in my heart where Larry was and it can never be filled."' A mistrial was declared in September after a hung jury couldn't decide on murder or manslaughter, according to CBS News.

Prosecutors said the shooting in front of stunned classmates was first-degree murder and that McInerney should be punished as an adult. They argued the shooting was a hate crime, an aspect jurors rejected, after authorities found white supremacist materials in his home.

Defense attorneys, who unsuccessfully argued to keep the case in juvenile court, said it was voluntary manslaughter because McInerney lost control of his emotions. They said the teen was beaten by his father and was described as a bright student who lost his motivation. King's father also blamed the school district for not doing more to address the brewing feud between the two teens and their son's flamboyant behavior, says Fox News.