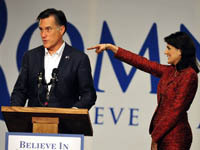 More than $1million in negative advertising - much of it bankrolled by Mitt Romney's allies - has eroded Newt Gingrich's standing in Iowa and thrown the Republican presidential race here wide open two weeks before the first votes.

The former House speaker's Iowa slide mirrors his newfound troubles nationally, and it has boosted Romney's confidence while fueling talk that libertarian-leaning Texas Rep. Ron Paul could pull off a win in the leadoff caucus state on Jan. 3, informs The Detroit News.

Gingrich and Romney are each favored by 30 percent of Republicans and Republican-leaning independents. Running behind them is Rep. Ron Paul (Tex.), whose libertarian philosophy has attracted a strong following. He stands at 15 percent, about double his tally in an early November poll. All other active candidates are in the single digits.

The survey shows President Obama receiving his highest approval rating since March, with the exception of a brief rise after the killing of Osama bin Laden. Although most Americans continue to disapprove of the president's performance on the economy, the number who disapprove of his overall performance has dipped below 50 percent for the first time this fall, according to Washington Post.

A Public Policy Polling survey of likely Republican caucus-goers in the key state of Iowa showed the former House speaker dropping to third place from first in the space of a week. His lead also has evaporated in national poll.

"Newt Gingrich's campaign is rapidly imploding and Gingrich has now seen a big drop in his Iowa standing two weeks in a row," Public Policy Polling, which is affiliated with the Democratic Party, said in a statement. Gingrich earned just 14 per cent in the latest Iowa poll compared to 22 per cent a week ago and 27 per cent two weeks ago, says Telegraph.co.uk.

Gingrich said Freddie Mac hired his firm for six years and that he personally received about $35,000 a year. He said he opposed any federal bailout of the organization.

Another person asked about Gingrich's past support of a mandate requiring people to purchase health insurance, a key part of Obama's healthcare law that is opposed by most Republican voters. Gingrich said he supported such a mandate in the early 1990s as an alternative to a healthcare proposal by Hillary Rodham Clinton when she was first lady, and that he later decided a mandate was unacceptable. As Gingrich tries to right himself in Iowa, his campaign also is under siege nationally because of organizational problems, reports Los Angeles Times.