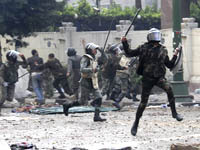 Clashes between protesters and the security forces in downtown Cairo, continued for a third consecutive day Sunday as reports of casualties escalated. Rocks and Molotov cocktails flew during violenct clashes, injuring nearly 60 members of the security forces.

Several newly elected lawmakers and religious leaders tried to negotiate a truce between protesers and the security forces, but failed. They were asked to leave. At least 10 protesters have been killed and more than 500 others wounded during three days of violence, according to the Health Ministry, says Xinhua.

The United States said it was worried by violence in Egypt and urged the army rulers to respect human rights as security forces wielding batons and firing teargas fought for a fourth day on Monday with protesters demanding an end to military rule.

U.N. Secretary-General Ban Ki-moon also condemned excessive use of force by security forces in Cairo protests that have widened a rift among Egyptians over the role of the army and cast a shadow over the country's first free election in decades, reports Reuters Africa.

Human rights activists called the government's depiction of the protesters as hooligans an official campaign of distortion intended to cover up the military's violence and bolster its image. Election monitors also said the violence and confusion were casting a shadow over continuing parliamentary elections - the first since the ouster of Hosni Mubarak.

The clashes began Friday morning when military police officers used clubs and electric prods to clear out a small sit-in left over from last month's protests against military rule; in response, thousands of demonstrators took to the streets, according to New York Times.

The fighting came in the middle of Egypt's staggered parliamentary elections, which have progressed relatively smoothly despite street clashes that raged the week before the vote began. But this weekend's renewed violence, including the documented use of live ammunition against unarmed protesters, undermines the Army's narrative that Egypt's democratic transition is on track.

The fighting also shows a disturbing pattern of systematic violence which, coupled with a lack of accountability, has further eroded confidence in the ruling military council to provide stability and leadership at a sensitive time of transition, informs Alaska Dispatch.