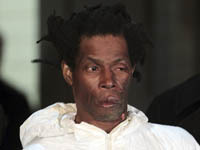 Deloris Gillespie goes up in the elevator to her fifth-floor Brooklyn apartment, carrying groceries, a man is waiting. His face is one she surely must have recognized.

Following his arrest in the death of a woman set afire in an elevator. Isaac told police he set 73-year-old Deloris Gillespie on fire because he was angry that she owed him $2,000, authorities said Sunday. Surveillance video from inside the small elevator shows that he looks something like an exterminator, with a canister sprayer, white gloves and a dust mask, reports ABC News.

A woman was ambushed in the elevator of her Brooklyn apartment building, doused with a liquid, set ablaze and left to die in a brutal attack that was recorded by two video cameras, police said.

Doris Gillespie, 64, burned to death in the elevator Saturday, police said, after an unidentified man who was waiting for her when the elevator doors opened to the fifth floor of the apartment building in Prospect Heights. The man sprayed Gillespie with an accelerant and set her on fire with a Molotov cocktail, New York City police spokesman Paul Browne said.

No arrests had been made as of early Sunday morning, and police were still searching for the suspect, according to Wall Street Journal.

Mr. Isaac, 47, methodically set the woman aflame, burning her alive in the elevator of her building in Brooklyn on Saturday, only a few feet from her apartment door, the police said. He sprayed the flammable liquid in the woman's face and over her cowering body, and then lighted a Molotov cocktail to ignite the fire.

Within minutes, Ms. Gillespie was burning to death in the narrow cab, and her assailant had fled down the stairs. The attack lasted only a few minutes, all of it captured by surveillance cameras; the sheer, calculated brutality stunned even the most hardened of homicide detectives, says New York Times.

At some point, Browne said, the suspect then pulled out a barbecue-style lighter, used it to ignite a rag in a bottle and then waited for a few seconds before using the flames to set her afire, causing smoke to fill the elevator.

The man backed out as she fell to the floor of the elevator, Browne said, and seemed to pause before tossing the bottle inside the elevator and onto her. Browne would not comment on the motive in the killing, but said the suspect knew his victim, informs msnbc.com.