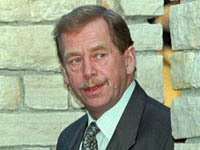 Vaclav Havel, the dissident playwright who wove theater into politics to peacefully bring down communism in Czechoslovakia and become a hero of the epic struggle that ended the Cold War, has died. He was 75. Havel died on Sunday morning at his weekend house in the northern Czech Republic, his assistant Sabina Dancecova said.

Havel was his country's first democratically elected president after the nonviolent 'Velvet Revolution' that ended four decades of repression by a regime he ridiculed as "Absurdistan", informs Times of India.

Mourners, some of them too young to remember 1989's Velvet Revolution, met at downtown Wenceslas Square, where Havel once spoke before hundreds of thousands of people expressing their outrage at the repressive communist regime.

They jangled their keys to make noise as anti-communist demonstrators did, sang the national anthem and observed a minute of silence for the playwright-turned politician, who died Sunday. The 75-year-old former chain smoker had a history of chronic respiratory problems dating to his time in prison, according to Detroit Free Press.

A Czech Embassy spokesman in Paris, Michal Dvorak, said in a statement that Mr. Havel, a heavy smoker for decades who almost died during treatment for lung cancer in 1996, had been suffering from severe respiratory ailments since the spring.

A shy yet resilient, unfailingly polite but dogged man who articulated the power of the powerless, Mr. Havel spent five years in and out of Communist prisons, lived for two decades under close secret-police surveillance and endured the suppression of his plays and essays. He served 14 years as president, wrote 19 plays, inspired a film and a rap song and remained one of his generation's most seductively nonconformist writers, says BlueRidgeNow.com.

His final years were dominated by "Leaving," a play about a politician who finds difficulty relinquishing the power he had come to enjoy. A film based on the play was released on March 22, 2011, and Havel attended the premier in Prague.

He also worked on assembling his personal papers for a library, which is in the planning stages in a building near the castle he used to occupy as president, reports BusinessWeek.