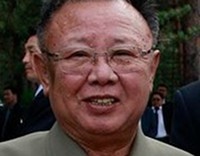 The long-standing leader of North Korea, Kim Jong-il, has died, the central television channel of North Korea said. According to official information, he died on December 17 at 08:30 a.m. local time (03:30 MSK) at the time when he was traveling in his train across the country.

Kim Jong-il was 69. The legendary leader of the rogue state has died from the psychological and physical exhaustion, which had been caused with his work for the benefit of the nation, the state-run KCNA news agency said.

The North Korean leader was suffering from diabetes and had a heart ailment. In spite of that, the leader was a heavy smoker - he preferred strong cigars. Kim also drank cognac on a regular basis.

According to Yonhap news agency, the leader of North Korea has died from a disease which he developed abruptly. Nothing has been reported about the nature of the disease.

The government of South Korea has taken urgent measures in connection with Kim Jong-il's death.

Kim Jong-il served as the head of the Democratic People's Republic of Korea (DPRK), the Secretary General of the Labor Party of Korea, the Supreme Commander of the People's Army of Korea and the chairman of the State Defense Committee of the DPRK. He inherited power in the country after the death of his father, the founder of the DPRK, Kim Il Sung.

Kim Jong-il's official biography states that he was born in a secret military camp on Baekdu Mountain in Japanese Korea on 16 February 1942. Official biographers claim that his birth at Baekdu Mountain was foretold by a swallow, and heralded by the appearance of a double rainbow over the mountain and a new star in the heavens. Soviet records show that Kim Jong-il was born in the village of Vyatskoye, near Khabarovsk, in 1941, where his father, Kim Il-sung, commanded the 1st Battalion of the Soviet 88th Brigade, made up of Chinese and Korean exiles. Kim Jong-il's mother, Kim Jong-suk, was Kim Il-sung's first wife. The boy was named Yuri Irsenovich Kim, according to Soviet records.

The political career of Kin jong-il began in 1961, when he joined the Labor Party of the DPRK. In 1973, he took the position of the Secretary of the Central Committee of the Party. In 1974, he became a member of the Political Bureau of the Central Committee of the Labor Party. In 1982, he became a deputy of the Supreme People's Assembly of the DPRK. He also supervised the work of special forces and organized terrorist attacks.

Kim Jong-il became the supreme commander of the People's Army of Korea in December 1991. In 1992, he ascended to the title of the Marshall of the DPRK. In 1993, Kim became the chairman of the Defense Committee of Korea. He received absolute power in North Korea in 1994.

Rumors about his poor health began to appear in 2008. Kim Jong-il visited Russia for an official visit in the summer of the outgoing year. He traveled in his train across Russia's Far East. Western reporters, who covered Kim Jong-il's visit to Russia, acknowledged that the North  Korean leader had not changed despite the rumors of his illness.