Belgian attacker leaves no explanation about why he did it 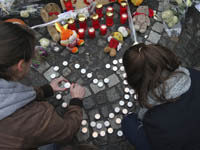 A man who went on a grenade and gun attack in the Belgian city of Liege left no explanation about why he did it, authorities said Wednesday.

There were at least 124 people in hospitals Wednesday, and at least five dead plus the gunman, according to prosecutor Danielle Reynders. Nordine Amrani, the 33-year-old suspect, killed himself at the end of the shooting rampage Tuesday, says CNN International.

Authorities said there was no evidence of any link between the attacker, whom they identified as Nordine Amrani, 33, to terror groups and extremist movements for which European cities have long been on alert.

"I totally rule that out," Danielle Reynders, the city's prosecutor, said at a news conference on Wednesday. "There was nothing at all discovered during the inspections that could link the events of yesterday to any kind of terrorism," she said. About 120 people were injured in the attack, which sent new shockwaves across Europe following a bombing and shooting spree by a far-right extremist that killed 77 people in Norway in July, informs New York Times.

The gunman threw three handgrenades on the busy city centre square, one at a bus-shelter, killing two teenage students instantly. A 17-month-old baby being held by his mother took a bullet in the head and died last night.

Of more than 120 people injured, five remain critical, including a 75-year-old woman, who was initially counted among the dead - and stands virtually no chance of recovering from her injuries. Amrani also suffered injuries from grenade shrapnel and then shot himself, according to police.

The destroyed bus shelters were covered with flowers on Wednesday. "Why?" asked the main French-language newspaper in Belgium, Le Soir. "We had been hoping to end the year with some peace and quiet following an interminable crisis and a year of social and economic calamity", reports The Guardian.

The attacker, a Belgian citizen, arrived at Saint Lambert Square, a busy shopping district, in a van with his weapons -- a pistol, a rifle and grenades -- in a bag. He had been summoned for questioning by police in a vice investigation at 1 p.m. yesterday.

Amrani had served three years in prison on charges of arms possession and drug trafficking, Reynders. He was released from prison on Oct. 8, 2010. Of his victims, five are fighting for their lives in intensive care and 40 have been treated for psychological trauma, Reynders said. Amrani died after shooting himself in the head, though a fourth grenade also detonated near him, according to Bloomberg.