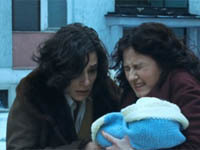 The Land of Blood and Honey snapshot

Protesters are attempting to ban Angelina Jolie's controversial directorial debut over its portrayal of Serbians in the Bosnian Civil War. In the Land of Blood and Honey chronicles the romance between a Serb soldier and a Bosnian Muslim woman and is set against the backdrop of the 1990s conflict.

However, Branislav Djukic, chairman of the Bosnian Serb Association of Camp Prisoners, believes the film should not be played in the Serb-run part of Bosnia and Herzegovina, according to San Francisco Luxury News.

'In the Land of Blood and Honey' is a drama telling the story of a Serb soldier finding his ex-lover, a Muslim Bosnian woman, among sex slaves in a camp.

Jolie has previously admitted the film is not an easy watch, saying: "We want people to feel what it's like to live in a war and we're also hoping that while people are watching this movie, they're praying that somebody's going to come and intervene, that something will stop this before it gets worse... I feel that's what we should be asking.", informs Entertainmentwise.

Judge Dow has ordered the plaintiff's lawyers to turn in a brief by tomorrow explaining why the case should proceed in Illinois federal court when the connection to the jurisdiction, according to the judge, "appears to be minimal, at best." The parties in the case are based in Croatia and Bosnia and Herzegovina as well as California, so the judge has indicated that he's leaning to towards moving the case to a federal court in the Golden State.

The transfer would be a small victory for Jolie and the film's producers. It would allow them to fight the lawsuit on home turf that in recent years has been dubious about these types of copyright infringement claims. In many instances, plaintiffs bringing the lawsuit have been ordered to pay attorney's fees for the defense, says Hollywood Reporter.

While her family is the subject of constant media scrutiny, Jolie says the attention she and Pitt receive does have one benefit. "Sometimes, you just jump into things because you're compelled to tell a story and learn about a situation," she says.

"But this is a difficult subject matter to get funded and get made. So if that part of the business that you don't like helps to get something like 'In the Land of Blood and Honey' made, it balances out.", repors New York Daily News.