Police come into conflict with Occupiers in LA 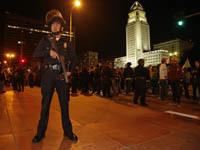 Police in riot gear closed in before dawn on Monday on anti-Wall Street activists in Los Angeles who defied a midnight deadline to vacate a camp outside City Hall, but stopped short of clearing the encampment.
Police managed to reopen blocked streets for morning rush-hour commuters after a tense standoff with protesters who had taken over a downtown intersection, but remnants of a crowd that had swelled to 2,000 overnight remained at City Hall, says Reuters.

Until there is a decision, the tent city's inhabitants are left to wonder if and when police will push them out - and if there will be the kind of violence that has engulfed evictions in other cities when they do. City officials said they will only move in on the camp when conditions are safest not just for protesters and officers but also the roughly 100 homeless people who had joined the encampment, informs Washington Post.

Mayor Antonio Villaraigosa had set a 12:01 a.m. Monday deadline for protesters to clear their tents and other possessions from the camp. But instead of leaving, more people came and joined the demonstration Sunday night. Protesters chanted "we won, we won" as police left after only four arrests during a largely peaceful, six-hour demonstration against the eviction. The arrests were on charges of failure to disperse. Instead of moving in to clear the camp, as had been expected, police concentrated on clearing several hundred protesters who had spilled into the street so morning rush-hour traffic would not be affected, according to Austin American-Statesman.

Occupy protests generally have been "a lose-lose situation for cities," said Dennis Kenney, a professor at John Jay College of Criminal Justice at The City University of New York. He gave Los Angeles police high marks for their approach, particularly for keeping lines of communication open with protesters. "You have to manage the demonstration instead of defeating the demonstration," Kenney said. Police crackdowns often spur more violence, he said, because "the harder you push, the more they push back." Waiting often allows a protest to "burn itself out," Kenney said, reports Los Angeles Times.