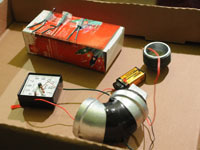 An unemployed resident of Washington Heights and a native of the Dominican Republic, Pimentel's arrest yesterday followed by almost two months New York Police Commissioner Raymond Kelly's statement that authorities were on alert for revenge attacks following al-Awlaki's killing in a drone attack in Yemen. The cleric had followers in the U.S., including in New York City, Kelly said Sept. 30. "The suspect was a so-called lone wolf motivated by his own resentment of the presence of American troops in Iraq and Afghanistan as well as inspired by al-Qaeda propaganda," Mayor Michael Bloomberg said of Pimentel last night at a press conference. "He was not part of a larger conspiracy emanating from abroad.", says BusinessWeek.

The attorney for a man accused of plotting to detonate pipe bombs in and around New York says his client doesn't match the profile of someone who would commit terrorism. Jose Pimentel, 27, is in custody after authorities say he intended to target U.S. military personnel who had served in Iraq and Afghanistan. Police say he also intended to strike U.S. postal facilities and police in New York and Bayonne, New Jersey, informs CNN.

At Pimentel's arraignment later, his lawyer Joseph Zablocki said his behavior leading up to the arrest was not that of a conspirator trying to conceal some violent scheme. Zablocki said Pimentel was public about his activities and was not trying to hide anything. Pimentel, also known as Muhammad Yusuf, was denied bail and remained in police custody. The bearded, bespectacled man wore a black T-shirt and black drawstring pants and smiled at times during the proceeding. A criminal complaint was filed by the Manhattan District Attorney, which stated that Pimental had a web site whose article is titled "Why Osama bin Laden is the leader of the Believers," which said: "People have to understand that America and its allies are legitimate targets in warfare. This includes, facilities such as army bases, police stations, political facilities, embassies, CIA and FBI buildings, private and public airports, and all kinds of buildings where money is being made to help fund the war.", according to CBS News.

Pimentel faces five charges, including conspiracy, criminal possession of a weapon and soliciting or providing support for an act of terrorism. At the news conference, officials displayed a close-up photograph of Pimentel wearing a black short-sleeve shirt and apparently working on a bomb. They also played a video to demonstrate what one of his bombs might have done had it been detonated. It showed a sedan exploding, its doors flying off and flames shooting from its interior, reports Los Angeles Times.